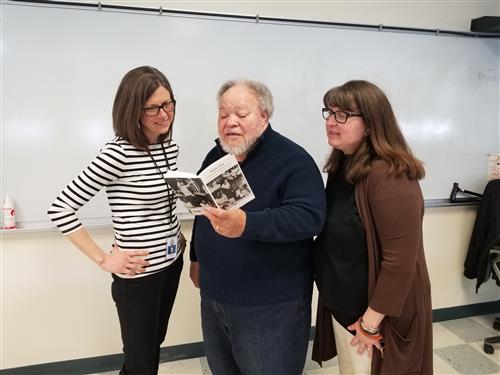 Amherst Central High School seniors who will study August Wilson's play "Fences" got the chance to meet and hear from the Tony nominated actor who brought one of the characters to life on the Broadway stage and on film.

Stephen McKinley Henderson was nominated for a Tony Award in 2010 for a supporting actor role for his performance as Bono and reprised that role in the 2016 film version of "Fences" directed by Denzel Washington. Henderson spoke to 60 juniors and seniors at Amherst Central High School about his role in the film and on Broadway, as well as vast knowledge of the work of his friend, playwright August Wilson.

His visit was coordinated by Susan Lasch, an ESL teacher at the high school who is also a graduate of the University at Buffalo Theatre and Dance Department where Henderson was a professor for many years. Although Mrs. Lasch was never one of his students, she reached out to him since the play "Fences" is on the 12th grade English curriculum.

The seniors in Katherine Rapp's and Mrs. Lasch’s English classes will study the play 'Fences' in mid-April. Amherst CHS sophomores read the play Native Son in English class and there’s a Henderson connection as he will appear in the new HBO film, “Native Son”.

Mr. Henderson was nominated in 2010 for a Tony award for his performance as Bono in August Wilson's "Fences" on Broadway, appearing alongside Denzel Washington. He reprised his role in the Academy Award winning film version this year. Mr. Henderson has had roles in "Lincoln", “Tower Heist” and in "Manchester by the Sea".

On stage, he is considered one of the premiere actors to interpret August Wilson's work, and has appeared in many of his plays both in the U.S. and abroad. He starred in "Jitney" in London, which won the Olivier Award-- Britain's version of the Tony Awards.

"Mr. Henderson spoke to us last year as well, and he is an incredibly inspirational and fascinating speaker. The students will come away with knowledge of the play itself, August Wilson himself, and inspiration for themselves," said Mrs. Rapp.

He spoke for over an hour and peppered his talk with many “Henderson-isms”.