For the first time in its six years of competing in the BAND Against Bullying, the Amherst Central High School team won first place in the performing arts competition that raises awareness of bullying related issues.

Thirty-six members of the ACHS Sweet Sixteen and Varsity Singers performed “What a Wonderful World.” Watch the performance here, https://www.facebook.com/NYBANDAgainstBullying/videos/264562381165136/

Senior Liz Mahaney contrasted this leading the choir in Sasha McCoy's arrangement of Louis Armstrong's "What a Wonderful World".  As the groups began to fight among themselves, the music turned into a dark and dramatic minor tonality while Liz's character attempted to break through these walls until she collapsed in agony and defeat.

Until just one person - played by Senior Samantha Klaybor - recognized the brevity of the self-created unfortunate and broken situation, and worked to create healing and love, lifting up Liz's character.  The music cadenced back into major, as the choir began to share their colored garments and boxes with each other, tearing down walls and stereotypes.  The choir built to a rousing conclusion,  and lifting up their boxes which hid words expressing the ideals of love, healing, and dignity.

Amherst competed with Buffalo Academy for the Visual and Performing Arts Middle School and High School, Clarence, Kenmore West, Lancaster, Williamsville East, North and South high schools. Each school develops a performance that incorporates the theme of dignity. The acts are encouraged to combine multiple forms of art to create the most dynamic illustration of Dignity Awareness.

Guest judges ranked teams by these criteria; overall performance and audience engagement, stage presentation, how well it incorporated themes related to dignity, how well the performance calls for the prevention of bullying and need for change, and originality and collaboration.

The Annual BAND Against Bullying Program was born in September 2012 through collaboration among M&T Bank, The National Center for Missing and Exploited Children (NCMEC) - New York Branch, and the University at Buffalo, State University of New York, including its Alberti Center for Bullying Abuse Prevention. 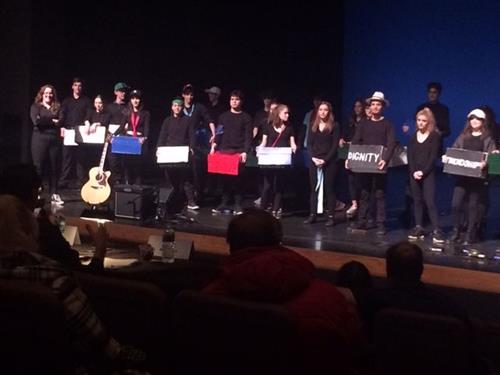