The Science Olympiad is an academic competition in which 15 students compete in 23 different STEM-based events.  The competition is like an academic track meet, consisting of a series of team events. Each year, a portion of the events are rotated to reflect the ever-changing nature of genetics, Earth science, chemistry, anatomy, physics, geology, mechanical engineering and technology. By combining events from all disciplines, it draws interest from a wide cross-section of students to get involved.  Emphasis is placed on active, hands-on group participation.

The team qualified for states by placing fifth overall in the Regional Science Olympiad competition. Regionals were held at Buffalo State College where the ACHS team competed against 31 other Western New York teams to earn fifth place overall.

The ACHS Olympians earned medals in 13 of the 20 events they competed in. The State Science Olympiad competition will be held at Le Moyne College in Syracuse on March 18-19.

Results from the Regional Competition: 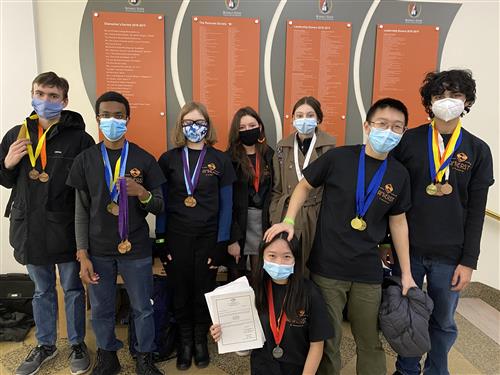