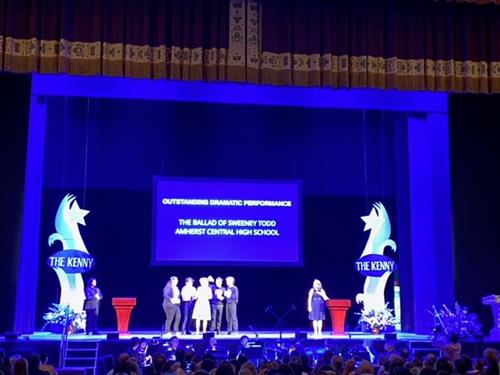 At the Kenny Award ceremony, the Operetta was awarded "Best Choral Performance" and "Best Dramatic Performance" for "The Ballad of Sweeney Todd."
Senior Amanda Kuo '22 was awarded the Kenny for "Best Supporting Actor in a Male (presenting) Role" for her portrayal of "Adolfo Pirelli."
Junior Rebekah Grande '23 and Sophomore Connor Hesch '24 were up for Best Actress and Actor in a Principle Role. As part of this incredible honor, they were involved in "KENNY Bootcamp" which took place nightly from 6-9 p.m. the week leading up to the KENNY Day.  Rebekah and Connor had the opportunity to perform a monologue, sing a solo, and take part in a choreographed number with the other leading nominees as part of the KENNY Awards ceremony.  Rebekah described the "bootcamp" events as a life-changing and inspiring experience.
"Sweeney Todd" was nominated for the Kenny Award in the following categories, and was selected as one of the top 5 of all Western New York High Schools to perform on stage at the Kenny Awards Ceremony on Saturday, May 21.
"Sweeney Todd: The Demon Barber of Fleet Street" was nominated for:
The 73rd annual ACHS Operetta was performed March 10-12 at theTheodore Masterson Auditorium at Amherst Central High School. It's a musical production not often done by high schools and was selected because there is a strong group of actor-singers who can handle the complexities of the score for "Sweeney Todd: The Demon Barber of Fleet Street (School Edition)."

“This Stephen Sondheim piece is one that I have always wanted to do,” said Justin Pomietlarz, director of choral activities and operetta director. “It is complex in its characters, music, and orchestration, yet tells a witty and poignant story about the complexities of human nature - love, revenge, anger, and compassion.”

Though much of the piece is quite funny, the second act gets very dark as the principal character, Sweeney Todd, goes on a killing spree to seek revenge on the local Judge Turpin who at some previous point banished Todd from London and took in his daughter to raise as his own.

“It was chosen because there are a strong group of actor-singers who can handle the complexities of this score,” said Pomietlarz. “It's also not frequently done by high schools as it poses many challenges musically and theatrically.  However, we are blessed with a fantastic design team who can tackle these issues with creativity and artistry. It's challenging, yet exciting music, and the kids are having a lot of fun.”

The Operetta poster was designed by ACHS sophomores Sage Sabatino and Chloe Camping with assistance from graphic designer Katherine Kuo who combined the work of both students. 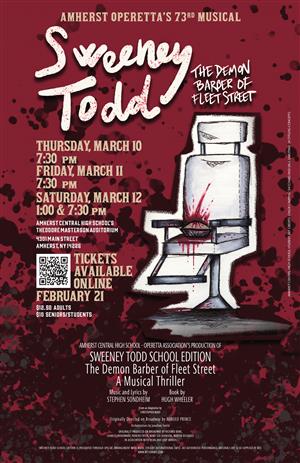