"The Power of a Puppet" at Smallwood Drive Elementary

Roary, an orange and black striped tiger puppet, and his video series with Social Worker Jennifer Noe has earned Smallwood Drive Elementary School a 2020 Promising Practice award from Character.org, a national organization that fosters character development in children and teens. Smallwood Drive is one of ​246 schools and organizations across the country being recognized.

Each week Smallwood Drive students in the Amherst Central School District look forward to seeing how Roary the Tiger would handle his feelings and emotions. In conversations with Mrs. Noe, Roary would try various strategies from Mrs. Noe to calm himself.

The “Power of a Puppet” campaign at Smallwood Drive was chosen for its creative approach to help children understand, care about, and consistently practice the core values that will enable them to flourish. It is fully aligned with one or more of Character.org’s 11 Principles Framework for Schools: A Guide to Cultivating a Culture of Character. Smallwood Drive Elementary School was the only school in WNY in 2019 to be named both a State and National School of Character by Character.org.

“Supporting students’ social emotional well-being is so important at Smallwood especially during the recent time away from school,” said Mr. Crozier. “Mrs. Noe and Roary’s video series is a media that we are so incredibly proud of and allows us to meet the needs of all children. Roary the puppet was an initiative that was developed during our Strategic Planning process a couple years ago and in a very short time he has become a very important member of our school community.”

Filmed in the school library in front of a green screen, students watched the videos in their classrooms, when school was in person, as part of morning announcements. During the school closure, the weekly video series continued and expanded its topics to help students deal with emotions they were feeling during the pandemic and school closure. 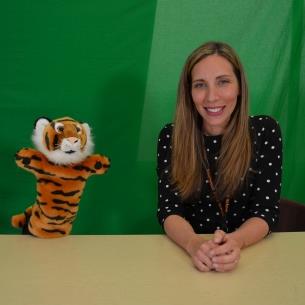 Mrs. Noe said what she loves about the videos is that kids watch them and make connections in their own lives. “They then can implement and practice these skills that directly contribute to positive behavior and interactions,” she said. “Strengthening a student’s social skills directly impacts their character development by helping them to build healthy relationships and conflict resolution skills.”

The videos also serve as a resource for teachers as the school introduced its Mindfulness program during the 2018-19 school year, teaching students about social, emotional and mental health awareness, as well as skills involving emotional self-regulation. Roary is most known for the creation of the Tiger Breath, which is a deep breathing exercise to help calm strong feelings and allow positive ways to cope.

“At Smallwood, we are committed to supporting the development of the whole child. We are fortunate to have Mrs. Noe and Roary lead the way in our children’s social and emotional development,” said Mr. Crozier.