Better than the Beach! Using a Topographic Sand Table to Teach Second-Graders About Landforms

Digging into a giant sandbox in the school library was like playtime for the second-graders in Michelle Degener’s class at Smallwood Drive Elementary. But this was no ordinary sandbox, so what felt like play was actually a hands-on way to reinforce concepts and vocabulary from their landforms science unit.

The students were using a topographic sand table that had been built at Amherst Middle School and loaned to the elementary school. The augmented reality sandbox allows users to create topography models by shaping real sand. The sand table has three parts: the sand table, a scanner, and a projector. The scanner detects the height and placement of the sand in the box, calculates the appropriate projection, and transmits the information to the projector, which then projects topographic lines and colors onto the corresponding sand below. It's also connected to a laptop that displays the topographic lines and colors that appear on the sand.

As the students moved the sand around, they talked about valleys, rivers and cliffs and could see the topographic contour colors change. In their landforms unit, they are trying to figure out why a flagpole set on a cliff is getting closer to the edge of the cliff over time. Ms. Degener said some of her students using the sand table were recreating the flagpole on a cliff in the sandbox and moving the land to see what happens.

Watch a demonstration of students using the sand table! Start the Video.

Working with small groups of four students, she allowed the kids to explore how the sandbox worked by letting them play in it for a few minutes. Then she began asking them to create some of the landforms they were studying. “How do cliffs form?” she asked. When they were stumped, she mounded up some sand and pulled her finger through the mound to demonstrate how a river would move land and create cliffs on each side.

“They are excited,” said Ms. Degener. “Why not, right? They love playing and now they get to play in a giant sandbox and apply their learning and talk about their learning.” 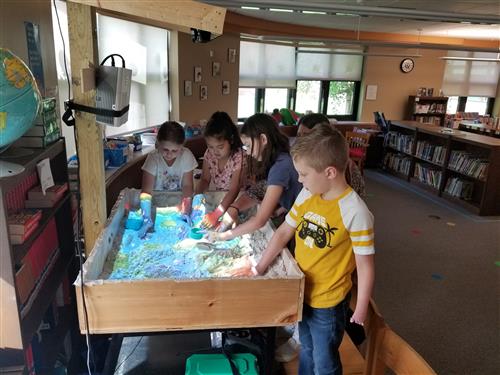 Middle School Library Media Specialist Drew Schmidle saw a sand table at the Strong Museum in Rochester a few years ago. He looked at the mechanics of it and in researching how to build one he came across a helpful website from the University of California-Davis that explained how to build it.

Mr. Schmidle was able to make modifications to the design and with support and funding from Dr. Lynn Shanahan, assistant superintendent for curriculum, instruction and technology, he constructed the hardware, carpentry and created the physical design of the piece. The technology department programmed the software and gathered up the necessary computing hardware for the project.

“When it was located at the Middle School, it was used to teach students about topographic maps, watersheds, and how different objects make different sized craters on the moon,” said Mr. Schmidle. “It was also used to make 3D models of the geography found in books to help bring a physical visual display of the scenery of a story to life for students.”

Aside from its instructional purpose, it has also served as a way for students to destress and do something different as it has been used in before-school programs and study halls.

As a collaborative project among library media specialists within the district, the augmented reality sandbox was loaned to Smallwood Drive library so various classes could use it.