Amherst Middle School students donated $1,798 in pennies, nickels, dimes and quarters to raise money in a Penny War for their Bald for Bucks campaign and to have the chance to see Keith Crombie, assistant principal, get “pied” during a lunch period.

Partly in celebration of Pi Day (March 14 – 3.14) and as a jumpstart to their fifth annual Bald for Bucks campaign, the Penny Wars was the brainchild of several middle school teachers, Kelly Jesse, Steve Johnson, Mary Newman and Melissa Whitten.

The Penny Wars goal for a class to have a chance at throwing a pie at Mr. Crombie was to raise $314. They far exceeded that goal. Final counts of totals raised by each class has not been counted yet, but the seventh-grade class took first place, sixth-grade class took second and eighth-grade came in third.

Seventh-grade students who got chosen to pie a teacher were Isabella Vivolo, who chose music teacher Erin Ayer; Matthew Murak, who chose math teacher Steve Johnson, and Mariam Natiq who got to "pie" Mr. Crombie.

How the Penny War worked:  Pennies and Paper are “Positive.” Silver “Subtracts!”

The middle school will celebrate its Bald for Bucks event on Thursday, April 18. 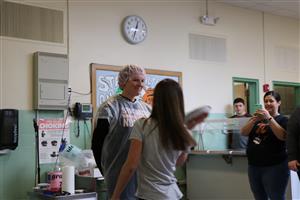