Goal Exceeded! 10 Teachers, 38 Students on the Bald for Bucks Team 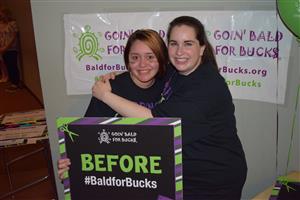 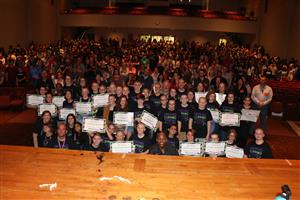 They reached their goal and more! The 2019 campaign for Bald for Bucks at Amherst Middle School raised $27,000 to bring the five-year total to more than $100,000 for Roswell Park Cancer Institutue.

This year, 38 students and ten teachers participated in Bald for Bucks. During the last four campaigns, AMS has raised over $75,000 to support the patient-care programs at Roswell Park Comprehensive Cancer Center. Many of the students and teachers raised money in memory of or to support someone they know who has been affected by cancer. Donations will be accepted until August, so there is still time to donate.

“To see a student’s reaction when they meet a cancer survivor and to know that their efforts might have helped that person recover their health is quite emotional and inspirational,” said David Mansfield, a special education teaching assistant who has coordinated the Bald for Bucks campaign at AMS since it started in 2015. “This event keeps growing every year and is a testament to the Amherst community’s desire to help those in need. Many of our participants have a personal connection to cancer and would like nothing else than to live in a cancer-free reality.”

Mansfield, along with teachers Kevin Fildes and Paul Biddle, upped the ante as an incentive to raise more money during the last week before the April 18 event. If the students raised $300 during a special contest the week before the event, three students would win a chance to shave the head of Manfield, Fildes or Biddle. Mansfield also came to school on 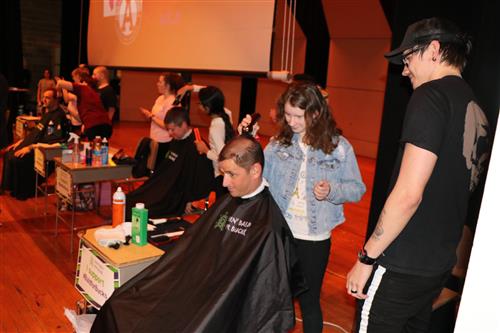 The entire middle school watched the team members get their heads shaved or styled. There was a live DJ and students who participated in the trivia portion of the program got to win prizes.

“Each year, we learn about the stories of families within our building who have been affected by cancer in some way. Some have lost a loved one, some are currently being treated, and some are survivors,” said Mansfield. “I am inspired by the toughness and resilience that our students and teachers show while they deal with a family member or friend diagnosed with cancer.”

Several fundraisers for Bald for Bucks have already been held. The Penny Wars contest raised over $2,000 and a Panera fundraiser raised over $350. Community support has been provided by 800 Maple and the Buffalo Niagara Marriott. Great Clips has stepped up to be the featured stylist for the third year in a row. Tyler Gibson from Dapper J’s Barbershop also is back for his second year of being a stylist for the event. 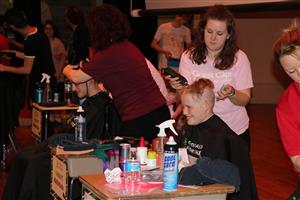 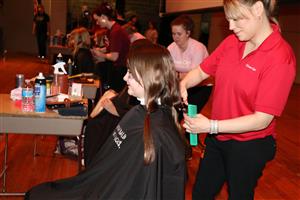 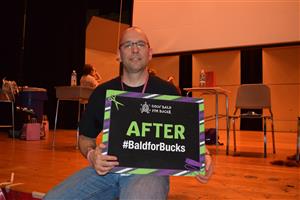