Giving flight to a literature lesson 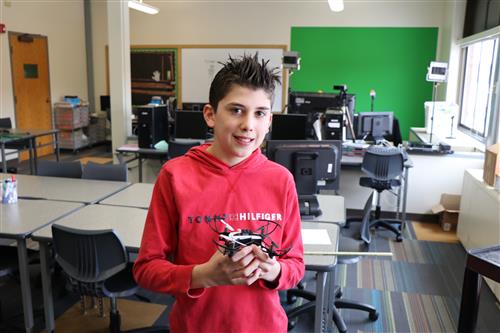 Sarah Barnes-Ryan, who has taught English for 12 years at Amherst Middle School, has read “Peak” with her seventh-graders for the past five years. While the book, which focuses on a 14-year-old boy and his dangerous climb up Mount Everest, did not include a helicopter rescue, Mrs. Barnes-Ryan and Library Media Specialist Drew Schmidle developed a drone exercise to replicate what could happen on a mountain excursion when there are sick climbers.

By putting the students in the role of a pilot, mechanic, engineer and public relations specialist, it not only brought the book alive, but it made the challenges and triumphs of a successful in-air rescue mission quickly apparent.

Building a lesson where the kids had to plan and execute a drone rescue mission expanded on the non-fiction historical materials the students were reading about Mount Everest, climbing gear and historical and geographic aspects of the mountain range.

“You got to see how hard it was to rescue,” said seventh-grader Spencer Brace, who played the role of mechanic. “It was a good way to make the book come alive and experience it better, with some fun, too.”

While the drones would have a very short run because everything was planned out, there were challenges built into the course that affected taking off, the rescue and the hospital transport.

Keeping the exercise most authentic to what would happen during a mountain rescue, there were three parts to their mission:

1. Take Off and Supply Drop at Base Camp. Using material from the book where climbers have to carry in and Sherpas help carry in supplies, the idea was that if this trip came to a base camp then they could do a supply drop. Schmidle, who also runs the Innovation Lab which is housed in the middle school library, came up with the idea of using Lego bricks to represent various cargo. For instance, a 1-piece Lego brick was oxygen, 2-pieces was water, 3-pieces was food and 4-pieces was medical supplies. Students had to decide how many supplies could be carried up the mountain on the rescue helicopter. They could put the bricks in various places on the drone. Contests were held for who carried the most and traveled the fastest. The battery life of the drones represented fuel, so students had to calculate how the weight and speed of their mission would impact battery life.

“The mountain was the top of the heating vent,” said Schmidle. “What was cool about it, was if the fans were blowing, they had to work with the wind shear. As the heater fans were blowing off air, they had to hit their landing spot. That made it authentic because weather was something covered in book.”

2. Rescue. Once supplies were dropped off, there was a hurt “climber” at the top of the heating vent and using the claw on the drone, they had to remotely pick up the climber.

3. Transport to Hospital. They had to go over the Himalayan mountains which were the computers and land at the hospital which was between computer monitors; a true representation of geographic landscape since a hospital would be located in a valley.

Working in four-person teams, each student had a job.

“But these lessons are some of the most meaningful we do, it adds a whole other layer and we are always trying to do real life things,” said Mrs. Barnes-Ryan.

Spencer Brace, who is described by his teachers as a student who likes math and science, said he was the drone technician for his group. The best part of the lesson was “tying in everything with drones, something so fun and cool to do that got to tie in school with it,” he said.

The hardest part of the lesson for him was “watching our pilot crash our drone.“ He said the landing was the hardest and the drone crashed on landing. Their team did rescue the people, but they could not fix the drone.

“Obviously it wasn’t as hard as landing a helicopter but we did really small platforms, vents and stuff and it gave a good perspective of how hard a rescue could be especially when we met climate,” said Brace.

The drone exercise was done before the class finished reading the book. They had been working on non-fiction articles as well as watching video clips of mountain rescues.

“It was really cool to see the connections the kids did make,” said Mrs. Barnes-Ryan. “They had been rescue pilots and they saw those challenges and made those connections and had those discussions.”

It’s not hard to engage seventh-graders when it comes to technology, but not all kids love it.

“Not all kids love technology, but they respond to it, it’s cooperative, it’s hands-on and they are working as a group,” said Mrs. Barnes-Ryan. “One of the things as an English teacher that we’ve been trying to do in the classroom, since Drew does an excellent job in the innovation lab, we come up to the lab several times a year to really get that STEM connection. The kids will say, but this is an English class, but in English we learn about all subjects. For kids that are science and technology-minded and don’t love my class so much,  you get to see them, and there’s a few kids in particular, and you get to see them shine, but then we always bring it back to our literature and there’s a writing component. Through the years we try to come up with one new lesson a year.”

“I think it gives the teachers the chance to get the kids out of the traditional classroom, and into an arena that is totally different. Just a change of venue is enough to get them excited about doing something different that day,” said Schmidle.

This is the third year Schmidle has worked with Mrs. Barnes-Ryan on a Mount Everest project. Last year they used Spheros, tiny programmable devices that represented oxygen, and built a huge cardboard ramp to the mountain. They both concluded it was a great lesson but messy and they collected cardboard for months. This year they wanted to try something new.

“It’s nice as an English teacher to see kids come alive in the different venues that you don’t see reading a book because they prefer math or engineering or hands-on activities,” said Mrs. Barnes-Ryan.

Advice to other teachers

Take the leap and try a lesson that is a little scary and sounds a bit uncontrolled at times. Both Schmidle and Barnes-Ryan have the same teaching style and neither minds a little noise or chaos during learning.

“All lessons we have done together have expanded students’ conceptions of an English class. We are reading and writing but we are problem solving, using critical thinking and collaborating together. It’s cool to see kids go outside their comfort zone,” said Mrs. Barnes-Ryan.