The new recycling box in front of Amherst Middle School came from two students with an interest in Girl Scouts and an idea to improve the environment.

Seventh-graders Erin Sheridan and Hailey Westendarp have known one another since first grade and each has been active in Girl Scouts since first or second grade.

“We noticed through the whole entire year in sixth grade that we used Styrofoam lunch trays and we realized it was not OK to use Styrofoam trays because they kill a lot of animals,” said Hailey. “We decided we could do something about it.”

They were also looking for a project that would be worthy of the Girl Scout Silver Award, the highest award a Cadette can earn. One of the project criteria was identifying an issue that they cared about that could benefit the community.

For Hailey and Erin, it was reducing the environmental impact that Styrofoam trays had in the lunchroom. 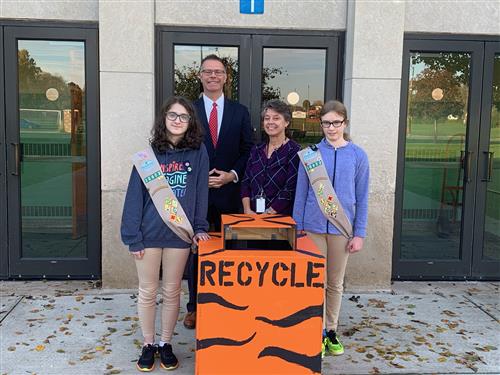 Last March, the girls and their parents met with principal Dr. John Griesmer, assistant principal Keith Crombie, and science teacher Bonnie Majda. At that meeting, they were ready to pitch their idea about reducing the use of styofoam trays, but found out that the district had already done that by purchasing hard plastic trays for the cafeteria.

“They had a wonderful idea,” said Dr. Griesmer. “So that’s where we started brainstorming, so we started thinking about what we could do instead.”

He suggested an outdoor recycle bin. They liked the idea and started planning. In total the girls spent 30 hours in meetings, planning the design, calculating costs, and the actual construction and painting. The box itself took about 20 hours to build.

They knew from the start that the design would have an orange and black stripe to honor the Amherst Tigers mascot.

What they did not know was how much fun it would be to use power tools. The sawing was done by the lumber store and Hailey’s father, but the girls used power drills to assemble the box.

The girls both became Juliette Scouts, where they can continue their Girl Scout experience on an individual basis. They have paperwork to submit for their silver award.

It’s the first time they have built something and now they get to see their creation every day when they come to school.