Two Inducted to the 2019 Athletics Hall of Fame

Inducted into the 2019 Hall of Fame at the third Annual Tiger Gala on June 25 was Kristen Ortman Maines, class of 2002 and Emily Warren-Zimmer, class of 2006. 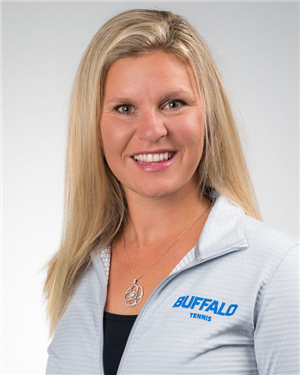 As the head tennis coach at the University at Buffalo, Kristen Ortman Maines is a great stategist and works with each player individually to improve their tennis game. Her coaching philosophy stresses academics and it shows. The team has received the ITA All Academic team award almost every year she’s coached and repeatedly held the highest team departmental GPA at UB; this past spring with an overall team GPA of 3.71. Her dedication, drive and commitment to her players has made her the second most-winning coach in UB Women’s Tennis history with a current record of 95-51. The team won the Mid-American Conference tournament in consecutive seasons, earning automatic berths to the NCAA championships. In 2016-17 the team won its first MAC conference title in 10 years. In 2017-18, UB repeated as MAC champs as the tournament’s No. 1 seed and tied the school record with 17 victories, which was set in 2006-07. The tennis team was the only women’s program at UB to earn two trips to the NCAA. In April 2018, she was voted MAC Coach of the Year and the ITA Regional Coach of the Year. She was named UB women’s tennis head coach in 2012, having worked for many years as assistant coach and coordinator of tennis operations at UB.

At Amherst Central High School, she started playing tennis in eighth grade and over the next five years, she went 75-0 without ever losing a set while playing first singles. Recruited to play tennis at UB, when she graduated, she held the UB record for most singles and doubles wins during her time there. She compiled a 59-38 singles mark and a 59-41 doubles record, culminating her UB playing career with a season-based 19 victories in both singles and doubles play in 2005-06. She earned a bachelor’s in early childhood education and a master’s in higher education administration.

Earning her bachelor’s in elementary and special education from Mercyhurst and a master’s in literacy from Canisius College, today she spends her time as a special education teacher at McKinley High School. She coaches the Amherst JV field hockey team and for the Buffalo Hurricanes field hockey club. She is a member of the Alumni association and part of the grants committee and on the board for the Daughters of the American Revolution Buffalo Chapter. She is a Mercyhurst Athletic Hall of Fame inductee.