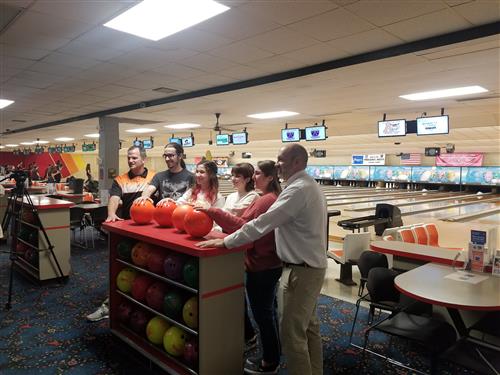 Senior Katelynn Banning is the last of the Banning family bowlers at Amherst Central High School and when she finishes out the season in February, it will end a long-standing tradition of having a Banning on the varsity bowling roster. For the past 15 consecutive years, there has been a member of the Banning family on either the girls or boys bowling team.

Four Banning siblings have been on the team over a span of 15 consecutive years:

At a match on Jan. 12, boys bowling coach Jason Beckman and girls bowling coach Greg Kisker honored the four with a short ceremony and presented a plaque to each.

During their time on the varsity bowling team, each also received their team's MVP award at one point in time. All four have been outstanding student-athletes, excelling on the lanes and always demonstrating great character and sportsmanship.

“Their entire family has been so supportive - attending all of the matches, tournaments, and even many practices over the years,” said Jason Beckman, boys bowling coach.  “They have helped with our fundraisers, served as our booster club representatives, organized banquets, brought cookies and treats to matches. I can't say enough about how supportive their entire family has been - and what an amazing accomplishment to be involved for that length of time.  It definitely won't be the same without them.”