Hey, I’ve Got an Idea! Leads to Interdisciplinary Computer Science and Physics Lessons 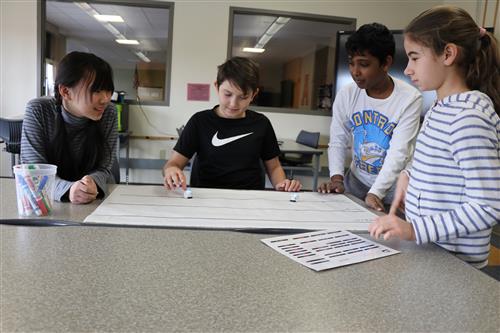 Knowing that technology and working with friends makes middle school students perk up in class, two seventh-grade science teachers in the Amherst Central School District completely changed up the hands-on portion of their physics unit on velocity.

Pairing up with the Library Media Specialist, the interdisciplinary team developed a two-day lesson plan that had the students working in teams to code and then conduct meter-long time trials with Ozobot mini-robots. The new lesson met a specific objective in presenting new learning for Drew Schmidle, library media specialist, and a different objective of deepening and reinforcing learning for the science teachers, Nancy Claxton and Stacey Susi.

Between them, Claxton and Susi have over 38 years with the district teaching science at Amherst Middle School. For many years, they have used a traditional method of putting toy cars or marbles on elevated ramps to measure by distance and time for their hands-on velocity component.

Schmidle, who has been with the district nine years as library media specialist, also operates the Innovation Lab at Amherst Middle School. The lab, developed in February 2017, sits at one end of the library. Enclosed with glass windows, it features green screen technology for morning announcements, and maker kits, drones, Ozobots, and other digital learning tools for developing curriculum extensions with classroom teachers.

The velocity lesson collaboration evolved organically between the three teachers because Schmidle knew what was taught in the physics unit, and Claxton and Susi knew of the availability of the ozobots and Schmidle’s expertise within the Innovation Lab. Their collaborations often begin with the phrase, “Hey, I’ve got an idea.” 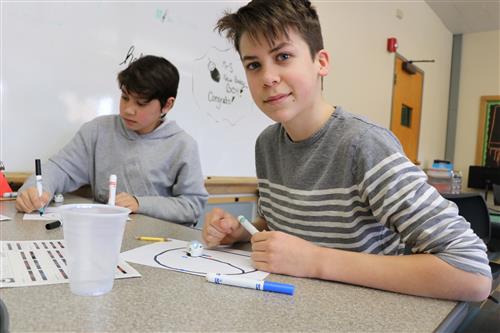 The district’s five-year Strategic Plan outlines more formal goals for use of instructional technology. In that area, the district is working toward the goal of extending learning by identifying and implementing academic opportunities that support, enrich and transcend the traditional classroom.

“This lesson created a learning environment with 21st century learning tools. It provided a digital and technological playground for students to further enhance classroom skills and instruction,” said Claxton, who was named to the NYS Master Teachers program in 2017.

Ozobots are tiny robots that love colors and can be controlled by students using pen and paper, tablets or computers. These robots use light sensors in the form of five tiny eyes to detect a colored road map; the eye in the middle reads the code, the other eyes read the edges of the track.

The new lesson was presented three weeks into a five-week unit on physics. Its development focused on deepening and reinforcing learning about motion. The first three weeks of the unit focused on calculating speed, momentum, acceleration in moving machines; analyzing the effects caused by changing forces or distances, and the ability to investigate applications of Newton’s Laws of Motion.

“The students liked this velocity lesson, any kind of technology that you can bring to the students it peaks their interest. They like to be in the innovation lab working on things,” said Susi.

“It was definitely a fun way to show calculating speed compared to a ramp and a car or a marble and ruler. Those were OK but this definitely took it to a completely different level,” said Claxton.

While the students came to this lesson with prior knowledge of Ozobots from elementary school, the broad learning goal was to have students create an exact algorithm, or ozomap, for the Ozobots to travel in order to successfully measure velocity the following day during part two of the lesson. 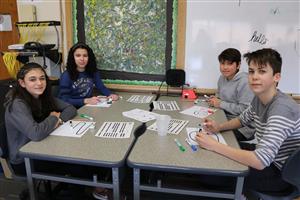 In introducing new material, Schmidle’s lesson objective was to make the connection to a computer language. Students would be expected to perfect the drawing of a guide line and color codes for the Ozobots to follow.

“I was teaching a computer language where it would be precise. If not specific and precise, the ozobots would not run and not going to do what you want it to do,” said Schmidle.

The eyes on the ozobots read a colored line to program its actions. A solid black line is the control; the unit will follow the black line at one speed. By inserting colors of red, green or blue to the black line, the speed will vary.

The students worked individually through a free sketch activity on practice sheets to draw a square with lines that an Ozobot can successfully read and use two codes that the Ozobot can read within the square. Schmidle posted a sample of successful lines and through trial and error the students learned that width, color contrast and ratio of color placement affected the outcome. They could test their lines using the ozobots and then problem-solve.

“If the kids didn’t make the color codes correct, even the right width, too long, too short, too faint with the marker, then the ozobot would not process the code properly and would not give them the scientific data they would need to complete their time trials the following day,” said Schmidle.

How well the team drew their lines using the proportional ratio of colors affected their time trial success. “The code would change if the color sequence was not correct or dark enough...or too dark. Students had to be precise,” said Susi.

The lesson was taught to the entire seventh-grade cohort of 225 students. About one-third of each class (2-3 groups) failed the first day when their lines did not work and had to redo their lines on the second day.

At the end of the lesson, Schmidle talked about how the manufacturing, automotive and warehouse distribution industries use Automated Guided Vehicles (AGV) and how the students’ activity that day was very similar, just on a smaller scale. His Exit Ticket asked students to describe in 2-3 sentences how life could be made easier with AGV.

Using their ozomaps, each team performed three timed trials on each line (black, turbo, snail). They recorded the time to travel one meter in seconds to the nearest tenth on a data table in their Ozobots Physics packet. 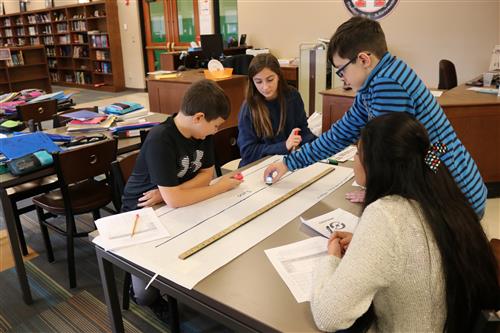 Using their knowledge about calculating and measuring distance and applying the velocity formula, the students found that some trials were faster than the others because they had more accurate lines drawn. They were also able to describe the trends revealed on their groups’ data table, as well as the plotted variances between the turbo and snail dose times.

Their packet including the following open-ended writing prompts: what is coding, how does the Ozobot understand codes, what was the control used for, was there a difference between snail dose and turbo speeds and explain, describe the trends of the graph. An extra credit question asked students to describe AGV and what they could be used for.

The format of the two-day lesson incorporated individual work, practice and rehearsing, revision, problem solving, discussion and group work to allow for various learning styles and audio, visual and tactile learning opportunities. On both days, all three teachers saw the students exhibiting group behaviors that reinforced what they knew, did not know, and needed to work on. As a team, the students gave each other feedback to assess and modify their performance. 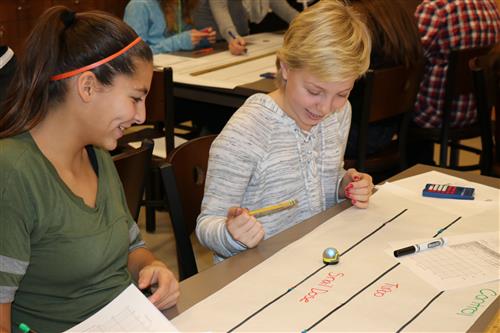 “There was good discussion going on, troubleshooting, and talking about how the code wasn’t there,” said Schmidle, adding that the discussion seemed to keep the students on task if the code did not work.

“The coding itself and drawing these lines, I knew were important, but until we ran the lab I didn’t realize how specific you have to be,” said Claxton. “It’s a challenge. We drew lines ahead of time as samples and played with it ourselves and quickly saw what did and didn’t work.”

“Based on students’ responses and the data we gathered from it, I think this lesson was successful,” said Susi. 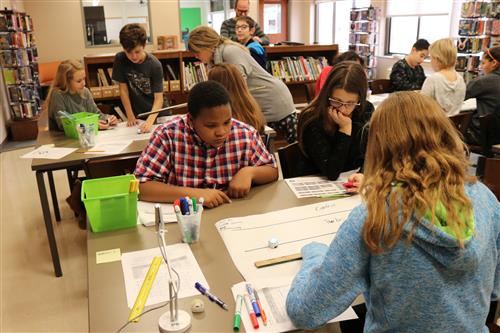 “By working together we infused classroom curriculum in a modern technological learning environment,” said Susi.

“Pooling our experience and strengths results in much better ideas and creativity in how we delivered the lesson. It brought higher level thinking and dimensions to the lesson which can only benefit our students,” said Claxton.