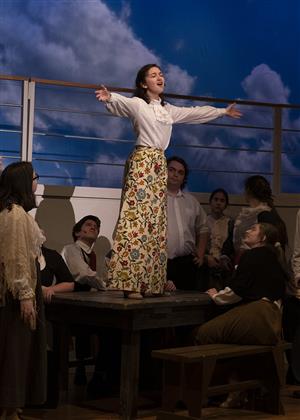 The production in early February of Titanic at Amherst High School represented the largest scenic project the Amherst Operetta Association has undertaken in its 71 years.

Mostly sung in its entirely, the score for Titanic: The Musical requires a huge, talented cast and its set requires an expanded stage area large enough to represent the Titanic’s bridge and the Marconi radio room.

“I have wanted to do this piece for many years. You need a fantastic orchestra, a capable cast, and a crew that can make it all happen. All of that aligned this year, and we knew it was the right year to take on the challenge,” said Justin T. Pomietlarz, Titanic director and director of choral activities at Amherst Central High School. “Personally, I am endlessly fascinated by the story. I am an experienced sailor, so I am naturally drawn to the nautical theme of the work, but beyond that, it is just an amazing piece of theatre that so clearly articulates mankind's arrogance and inadequacy - and our frailty - in a powerful and emotional way.” 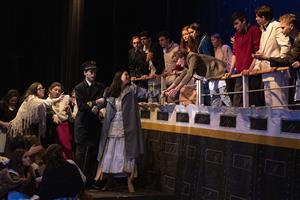 ACHS and its Titanic production was selected as a finalist for the 2020 Kenny Awards, presented by Shea’s Performing Arts Center and The Lipke Foundation. Now in its 27th year, the award celebrates excellence in high school musical theatre in Western New York. The Lipke Foundation will provide a $10,000 grant to the theatre program that receives the award for Outstanding Musical Production. Award winners are announced in May 2020.

With approximately 150 students in the cast, orchestra, stage crew, staff, and make-up committee, the show was incredibly involved.

Musically, it is almost entirely sung with only a few dialogue sequences. There are many true-to-life characters, so the production employs a huge cast of personnel that need to be covered, all of which must sing at a high level. The orchestration is symphonic in scope, with incredible string, wind, brass, keyboard and percussion parts. The director even borrowed a contra-bass clarinet from Orchard Park High School to complete the necessary orchestration.

From a scenic perspective, the stage area had to be expanded so volunteers will build side stages to expand the playable space of the Titanic’s bridge and Marconi radio room.

Parents Anne and Carl Kelly, who both have degrees in theatrical stage design, jumped on board with the idea of Titanic last year, and after researching the necessary components of the show, designed and built a scale model of the auditorium stage so they could play with scale model set pieces in the design and planning of the stage. Former Amherst parent Cathy Pera, owner of Bison Scaffold, donated thousands of dollars of scaffolding that will be used as support structure for the myriad of movable platforms that will make up the set.

While most of us are very familiar with the James Cameron film version of Titanic, the Broadway musical was meant to be true-to-life and sweep the audience into the emotional turmoil that must have been present those days.

“The score begins so hopeful and excited,” said Pomietlarz. “Third class immigrants moving to America to begin a new life, second class love affairs, and lavish first class portrayals of notable figures. But as the drama unfolds, the music is powerful and emotional. I find myself getting choked up even during rehearsal.”

The audience saw cast members giving an honest portrayal of a real person facing their end.

“I think the kids are learning so much, many have done incredible research on their characters. There's an incredible responsibility to that charge to pay homage and respect to a real person through one's own performance. In the end, those that perished on April 15, 1912 are brought back from the depths to tell their story. The power of the music makes the emotion that much more real,” said Pomietlarz. 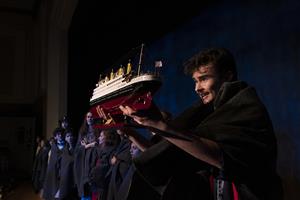